Extracts from our GUEST BOOK
GYROPHENE 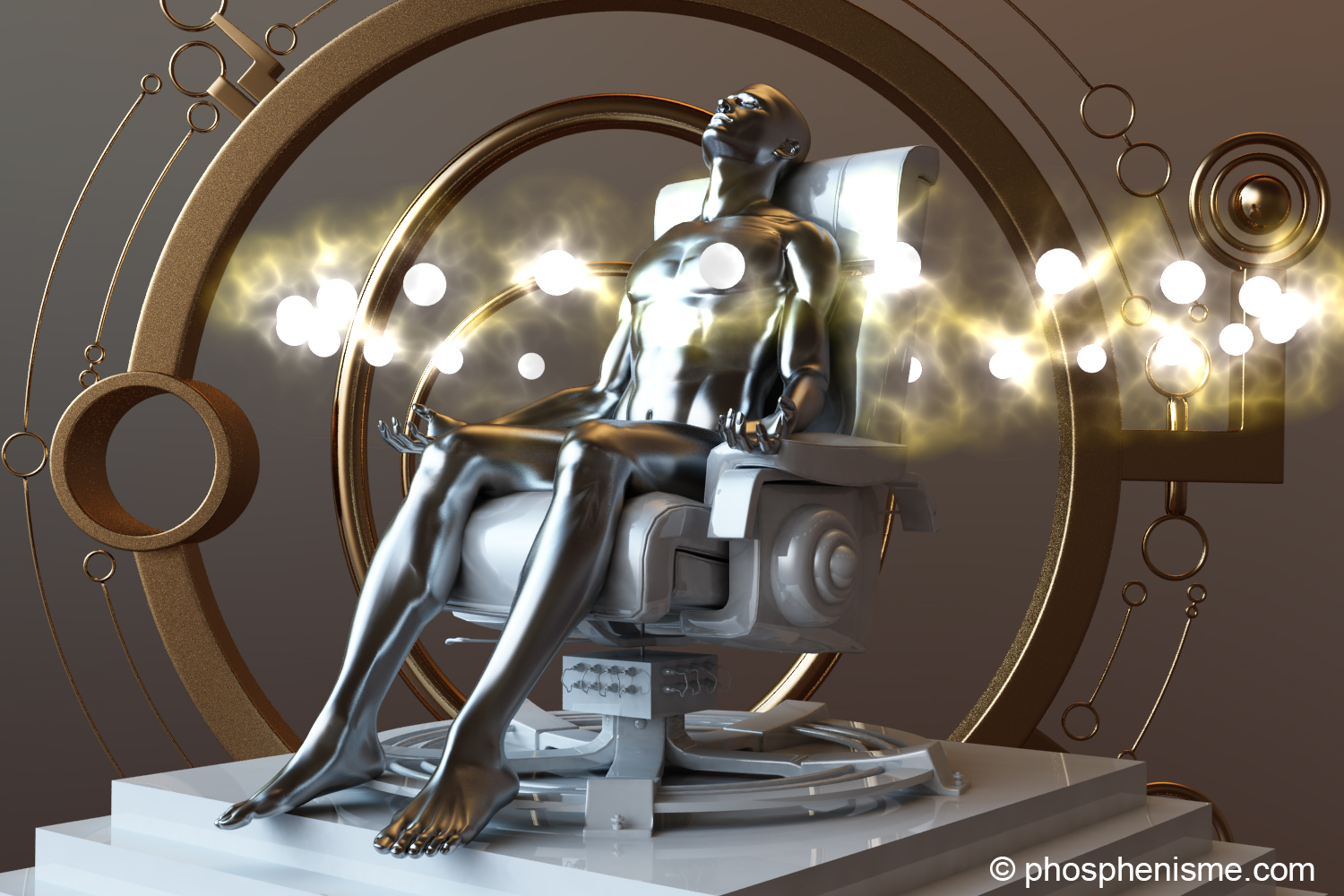 I felt a column of energy that started to rise from the bottom of my spine as soon as the seat stopped (turning). This energy rose up to my cranium then filled it like a half-sphere turned upside down. The energy then came out through my third eye. It was as if I had a radar system that detected this column of energy. I felt this energy within myself and at the same time I saw it as a spectator. I was in complete darkness, all the lights were off, but I could see everything in the room. I saw a beam that swept like radar, rotating around the central axis of my body. I was able to feel everything that the beam swept across during its rotation.

As I am interested in the dances of whirling dervishes for the development of the higher self, and after having thoroughly studied Doctor Lefebure’s book ‟Phosphenism and Whirling Dervishes”, according to your most valuable instructions, I built a rotating seat in order to stimulate the Gyrophene even more.
I would like to say that you are right, as the results are much more powerful than those obtained with the simple Dervish dance. I do not know if there is any experience deeper than that of communicating with the forces of the cosmos, but for now I have found a means of investigation that permits me arrive at a state of complete self-fulfillment.
Though this may look like a lot of DIY, the rotating chair is extremely efficient. Moreover, the rotating seat takes up very little space when folded. One can control the speed of the motor and rotate in both directions in order to practice a balanced session, as advised by Doctor Lefebure. With my warmest thanks.

Whirling Dervish dance: with my hands and my arms stretched out, I am concentrating on the top of my head. I am rotating on myself, using my left foot as a pivot… When I stop, circles come out from the top of my head every second, rotating in the same direction as my body. When I rotate, the point of concentration lags. When I stop, it rotates, rises slower, passes by the top of the head picking up speed, going faster and faster. At a certain height, the point explodes with force. I then feel the same energy that I described earlier in my hands and it seems that the fluid touches the ground. A few minutes later, I hear a pleasant music in my head, that lasts for a brief moment. I can find that music back easily. I can trigger it by concentrating on the inside of my head.

I rotate for 3 hours straight without taking a break: then I decide I should do a phosphene, to observe the effects the rotation would have on it. It exceeds the median axis of my field of vision and moves in the same direction as the physical rotation. The phosphene takes approximately eight hours to replace itself in the median axis. I am going to continue experimenting on that subject. I wonder if practicing gyrations for thirty minutes only would actually be more beneficial. On a spiritual point of view, I have felt a very intense sensation of contact with the Invisible World; though I was not trying to produce such a reaction. When I stopped, after practicing for three hours, I remained in a state of inner calm, kneeling. I then clearly felt a hand laid on my head, a little bit towards the back. I opened my eyes and I turned around, there was no one. I really thought that there was someone, a physical person that touched me. Then, when I close my eyes, I suddenly felt dragged out of my body and found myself in the Cosmos. For three hours, I have experienced sensations and perceptions that would take me an entire book to describe. I never thought that such perceptions could exist. I intend to practice assiduously with the Gyrascope in order to maintain these wonderful phenomena.

Last night, I did my evening session with the Gyrascope (I also practice another session during the day). I associated the mantra ‟kikiki” at the rhythm of 1/6th of a second. For a month and a half, I have also practiced the head sways, the static tensions, and the exercise of ocular convergence, for a total of three hours a day. During the night, I was woken up by a movement of rotation. I had the impression that I was ripped out of my bed and that I performed a complete rotation on myself, like a corkscrew. The phenomenon was powerful, I was completely passive. The complete rotation took four seconds and I woke up straight away. I also have more and more surprising experiences: – I have had the first lucid dream in my life, a month ago. An incredible experience that I wish everyone would be able to enjoy. I flew in a straight line like Superman to the Sun and to Saturn. – Three dreams of flying. – A progressive illumination, as if someone had turned the lights on in the room, three times. – And now, that rotation on myself, as disconcerting as it was powerful… I must say that, at first, I was skeptical about the method. I told to myself that I would test it to see what it was like. More and more, I have the impression that I have stumbled upon something powerful.

During the last three months, I have had three dreams during which my entire body was rotating on itself. As it is unusual in my dreams, I immediately focused my consciousness of that ‟new phenomenon” and I thus had a lucid dream. I took the position of the Whirling Dervishes in order to rotate even faster. In the last dream I decided to use the rotation to rise into ‟levitation” and to take off like a rocket towards the sun. Despite the high speed, I reached my objective.

I wake up at around 3:30 am and, as I cannot fall back asleep, I lay on my back and I try to relax… After a little while, I feel a sort of a ‟wave” in my body… For a few minutes, I repeat the sentence ‟I am now coming out of my body”, following an anteroposterior and lateral mental rhythm of approximately two seconds… A few moments later, I can hear a sort of a very brief buzzing sound and I have the sensation that I am standing. As I do not see anything, I concentrate on seeing and I think about the living room. Instantly, I find myself there and the room is full of light. The difference between my other out-of-body experiences is that, this time, my movements are instantaneous (‟I think about it and I am there”). I try to find my cat but I do not find it. I come back in the bedroom and find myself laying on my back, though slightly above my physical body (I was thinking about the ceiling at that moment). I start to imagine that I am rotating (like if I was lying on a large Gyrascope, clockwise). On the ceiling, shapes (that I would call geometrical, full of colors) start to rotate in a movement that traces a kind of a circle (I feel the sensation of gyration and it is really pleasant and it seems that, again, the rhythm is spontaneously taking place at the rate of a rotation every two seconds…) At some point, I lost the visual perception of the astral and, despite a few suggestions, it did not come back. So, I said to myself that it did not really matter and I started to use my sense of touch to feel my environment. I felt the wall behind me and started to plunge my hand into it. I could easily pass through the wall, as if it had become a very soft paste. I then also plunged my head in there. The sensations were really special… Finally, I laid on my back against the physical body of my girlfriend (who was lying on her back). I could feel her physical body under my astral body very well and I decided to let myself fall within her. An endless fall started, but it was not at all unpleasant, quite the contrary… That was how the experience ended.

Powerful motor allowing me to turn in both directions with variable speed thanks to the remote control that I hold in my hand. The combination of Gyrascope and rotating seat allowed me to experience several surges of energy. It also allowed me to enrich my personal life and even have a very powerful experience with one of my children.

As I am very far from being a handyman, I kept it simple. I took a secretary’s chair that can turn on itself, and I removed its wheels so that it remains firmly anchored to the ground. I put a cordless leaf blower (found in a relative’s garage) on my lap. A leaf blower looks a bit like a big hair dryer. And let’s go for a few good rotations… Only drawback, the adjustment of my rotational speed, but on the other hand, perception of a super Gyrophene . After an afternoon of turning sometimes in one direction, sometimes in the other, and observing the effects on my phosphene, at night I obtained a very beautiful lucid dream followed by such a beautiful dream of taking off. I will go back to Dr Lefebure’s book on whirling dervishes to refine my technique.