The Sanskrit word kundalini means ‟coiled” or ‟coiled like a snake”. There are other translations like ‟the power of the snake” that illustrate the energetic nature of the concept. Certain authors suggest a connection between Kundalini and the Caduceus, a Greek symbol constituted by two coiled snakes.

The concept of Kundalini comes from the yogi philosophy of ancient India and is related to the motherly intelligence that governs spiritual awakening and maturation: Kundalini Shakti.

According to the Yogic tradition, Kundalini stems from the root chakras and is coiled three times and a half around the sacrum. The awakening of Kundalini is associated to the emergence of characteristic energetic phenomena, experienced by the yogi in a somatic way. The surge of this energy is a vibratory phenomenon that accompanies a period of spiritual development.

The most ancient references to Kundalini can be found in the Siva Sutras (8th century). Nevertheless, the concept of Kundalini dates back to much older times.

One of the first Europeans to introduce the concept of Kundalini into the West was Sir John Woodroffe, who wrote The Power of the Snake under the pen name of Arthur Avalon. Later, C.W. Leadbeater of the Theosophical Society and the psychologist C.G. Jung did a lot to popularize the concept.

Today, Kundalini can be considered as a popular concept, as it is widely refered to by the yoga and New Age circles (mainly thanks to the works of Gopi Krishna). Nevertheless, the popularization of the concept in the West has not particularly contributed to a genuine understanding of what Kundalini really is. Certain authors claim that Kundalini is a dangerous force, difficult to awaken. Others assert that only a handful of great initiates, hidden in the depths of Asia, are capable of transmitting this teaching for which the masses are unfit.

Shedding a new light on the subject, Doctor Francis Lefebure, a French physician and scientist, studied the physiological aspects of Kundalini and designed a device allowing its awakening on a scientific basis.

In his book From the Praying Wheel to the Spiritual Dynamo, Dr Lefebure presents the theoretical discoveries that have led him to the creation of the Gyrascope, the machine for awakening Kundalini. Dr Lefebure describes how anyone can build this device, that can produce the awakening of Kundalini with one hour of practice a day. The power of this awakening is of such magnitude that the experimenter will not doubt that it is the true Kundalini that they have experienced. The result is absolutely convincing. The subject can then stop practicing or further their spiritual develoment with the device.

Extract from the book From the Praying Wheel to the Spiritual Dynamo:

‟For the persons who are not familiar with the oriental traditions of Kundalini, let us say that it is a force that one is completely conscious of when it manifests itself. It even produces various states of hyper consciousness.

This force fundamentally assumes a WHIRLING ASPECT. It appears in the lower part of the trunk, approximately one or two centimeters above the perineum, and then rises.

Certain authors describe the rise of this force as a helical movement around the axis of the body, through the center of gravity, along a virtual vertical line.

According to other descriptions, it rises inside the spine, following its curves. This sensation is particularly surprising as one does not usually feel one’s spine. Nevertheless, we have been able to experience ‛something extraordinary’, a seemingly supernatural force, rising inside our spine, thanks to the exercises described in our book.

Various authors state that the surge of Kundalini ‛puts the chakras in motion’, i.e. the main organs of the first subtle body (called etheric body). The movement felt in the chakras being a rotation, a whirling, it thus seems that it is simply particular locations of the Kundalini, a veritable whirling of the mind.

We have stated that this force rises in a helical movement. This is important for our experiments and for our explanations about what happens when it reaches the head: a state of inner illumination arises, together with a purification of thoughts and feelings as well as the development of mental powers (…)”
It is by introducing rotations in one’s thoughts that Kundalini, whirling force, is activated. The dance of the whirling dervishes or the Tibetan praying wheels are based on the same rotational principle. The effect on the psyche is similar to a centrifugation. During the centrifugation of blood, for example, the heavier elements are pushed at the periphery by the centrifugal force when, as a reaction, the lighter elements (pure water, in the case of blood) are concentrated in the center of the device. The process is the same with consciousness and a genuine cleansing of thoughts and feelings takes place. 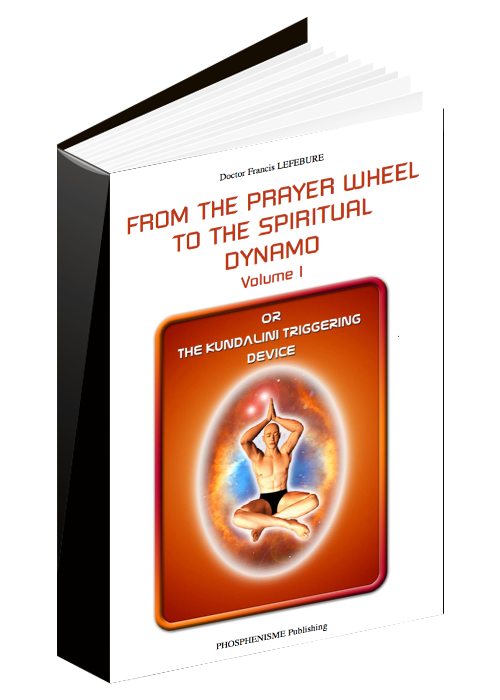 Click on this image
to see the book:
Kundalini (Volume 1)