The UFOs (Unidentified Flying Objects) are phenomena, perceived in the air by witnesses or recorded on various media, but that cannot be identified. It is impossible to assert that these phenomena all have the same origin. There is absolutely no unity in the testimonies as they come from varied sources.

1) Visitors from another planet

Though romantic and attractive, this theory is not very plausible. First, the theory of relativity does not allow travel at speeds higher than the speed of light. It would thus take centuries to travel across the cosmos. Also, it is surprising that no material trace (object or artefact) has ever been left behind by interstellar travellers, though thousands of people maintain that they have been kidnapped by aliens, or that they have seen an alien craft landing.

The generalization of mobile phones equipped with cameras should lead to an upsurge of recorded observations of UFOs. It is not the case. Finally, certain scientists like professor Meesen have analysed the data of military and civilian radars and matched them up observations of UFOs, particularily those which took place during the ‟great waves of UFOs” like the one that took place in Belgium in 1990. They have discovered no connections between the observation of UFOs and the unidentified echoes detected by radars.

None of these explanations completely buries the theory of alien vistors, but one must admit that it is rather fantastic.

Visions or mental images are different from pathological phenomena like hallucinations. They remain mysterious for today’s science. The discoveries in cerebral physiology of Doctor Francis Lefebure, a French physician and scientist, have allowed him to understand scientifically the mecanisms responsible for the production of mental images (hypnagogic visions that appear while one is falling asleep, dreams, mystical visions). His works are based on the systematic use of the phosphenes. The phosphenes are all the subjective sensations of light, i.e. those which are not directly caused by light stimulating the retina.

Dr Lefebure did a complete study of the solar prodigy that took place in Fatima (Portugal) on october 13th 1917. Among the testimonies, we can quote the perception by many witnesses of a ball of light crossing the sky or the perception of little balls of light that fell from the sky like snow flakes and that disappeared when they reached the ground or when witnesses tried to catch them in their hands.

Dr Lefebure considers that these perceptions are connected to the rhythms of the phosphenes and explains in detail these phenomena in his book: Phosphenism, a New Explanation of the Origins of Religion.

‟The greatest miracle of the roman Church was the solar prodigy of Fatima that occured in front of 70,000 people. For ten minutes, the crowd saw the sun moving in unusual ways. First, it started to tremble, it then darkened. Afterwards, it started to sway in the sky, to rotate, its rays rotating like the spokes of a wheel, then it seemed to fall on the terrorised crowd before going back up in the sky, several times in a row. Many persons experienced visions during these ten minutes. It was raining just before the event. Nevertheless, the mud on the ground and the clothes of the witnesses were dried as if by miracle. A lieutenant took a picture on which appears objects that did not exist physically. A teacher of science, standing on his balcony, said: ‛I have seen something I cannot explain’. The editor of an antireligious newspaper left convinced and wrote several enthusiatic articles.

The phenomena perceived during the great miracle of Fatima match the characteristic rhythms of the phosphenes: the people in the crowd believed they were seeing movements within the sun because they confused the sun with their phosphene. The trembling of the sun is the rhythm of 1/6th of a second. Its darkening is the negative phosphene.

These various movements of the solar phosphene can be produced easily if one focuses slightly next to the sun, rather than directly on the sun, and if one has practiced exercises of lateral head sways of the top of the body, while focusing on the sun.

The crowd perceived these rhythms in an intense manner, because they were multiplied tenfold by telepathic resonance.” 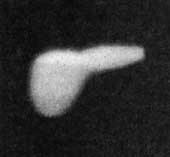 Photograph of a phosphene (diffuse glow or UFO?)

The diffuse glow, final phase of the phosphene, presents remarkable properties. It can be photographed and allows the perception in the dark, of physical objects moved across it. It has a major role in the production of visions. The diffuse glow appears as a whitish cloud with an unprecise edge. According to clairvoyants, it is within this cloud that visions or ‟flashes” of clairvoyance appear. It is also what the children shepherds of Fatima related. The ‟Lady” appeared in a cloud that looked like white smoke.

In The Initiation of Pietro, Dr Lefebure establishes a connection between phosphenic phenomena and UFOs.

‟More and more people believe that the extraordinary occurrences of Fatima should be imputed to UFOs. There are even priests who maintain that the Virgin Mary used a flying saucer to manifest herself.
First of all, it is interesting to note that, whatever the original source of the phenomenon, its connection with human consciousness was the phosphenic substance generated by focusing on the sun.

Also, it is important to note that very disparate phenomena are classed as UFOs. Among these phenomena, there might be several unknown phenomena of different nature.

We do have to acknowledge that there are some similarities between the descriptions of flying saucers and what we know of the phosphenic substance.

For example: ‛This object, which had a diameter of about 25 to 30 meters, was swaying in the air and, as it was oscillating, it was moving towards us, in complete silence.’ Policemen who arrived on the scene noticed that ‛the object that hovered at a distance of roughly 100 meters above them was swaying.’ Several other witnesses that had not consulted each other saw the object move towards them, ‛swirling and fluttering about like a leaf that falls slowly from a tree.’ Finally, the scenery took on a red tint and the white walls of the farm became red.

It is obvious that this description resembles, on a smaller scale, the description of some of the phenomena described by the crowd in Fatima: whirling movements and sways, colored light projected on the ground.

We can thus wonder if some of the phenomena classed as UFOs are not actually clouds of phosphenic substance.”

The explanations of Dr Lefebure, applied to UFOs, are closely akin to those of certain authors like Bernard Méheust who talks of technological fantasy or C.G. Jung who describes UFOs as modern myths. Indeed, visions of flying chariots of fire or white-winged angels are symbols of travel and communication between the material and the spiritual plane (the sky). A modern point of view substitutes spacecrafts to this kind of images, and these visions of flying saucers also are metaphors of travelling between the planes.

Exercise with the diffuse glow

Do a phosphene by focusing on the phosphenic lamp for 30 seconds.
Put an eye patch on, to create optimal conditions of darkness.
Observe the different colors of the phosphene until it disappears.
After about 15 minutes, the diffuse glow appears in the form of a whitish cloud. Concentrate your attention on a detail of this cloud. The area of the cloud you focus on will become brighter and sharper. If you stay concentrated on details in the same region of the glow, you will probably be surprised by the appearance of a very sharp though very brief image.
This cloud, called diffuse glow by Dr Lefebure, can easily be perceived with your eyes open and can be transmited by telepathy…