Alchemy is an age-old ‟science” which goal was to produce the Philosopher’s Stone, a much lusted-after object for centuries. This Stone was supposed to transform base metals into gold, and, beyond the dust thrown in the uninitiated’s eyes, it allowed to manufacture of the Elixir of Life, a substance that gave access to immortality.

Relegated to the rank of superstition, Alchemy nevertheless had its moment of glory, and certain scientists studied it with attention, sometimes advocating it like Leibniz or Newton.

What is the connection between Alchemy and Doctor LEFEBURE’s Phosphenism? To understand it, one must look into this obscure Art full of symbolism and fake revelations that would protect the great secret of the Alchemists. Was the famous Philosopher’s Stone really what the texts revealed, or did the Alchemists fool their readers, as usual, expecting only a brighter mind to understand their symbols and the true meaning of their quest?

Persons interested in Dr LEFEBURE’s works will probably notice things that are invisible to others in a treaty of Alchemy. The Sun and the Moon appear in many texts on Alchemy. Their importance is huge. They are represented everywhere. This also true with Phosphenism. Doctor LEFEBURE has granted a primordial role to the sun, the main source of light: at the origins of all religious or initiatory movements, there is solar worship.

Alchemy also mentions ‟astral light”, literally ‟light coming from the stars”. In what way could it ber important for the realization of a stone? We have to admit that this stone is but a symbol. In the framework of Phosphenism, we understand very well the importance of light, as did the Alchemists…

Even more surprisingly, in 1557, Roger Bacon, an alchemist, wrote the famous ‟Miroir d’Alquimie”, a book that can still be found in secondhand bookshops and which cover represents a character harnessing the light of the sun with a mirror, to project a ray of light on matter. This exercise reminds of certain practices of Phosphenism that use the reflection of the Sun.

‟For the alchemists, according to Fulcanelli, spirits are a real influence, though almost immaterial. They have a mysterious action, unexplainable, impossible to understand, but efficient, on the substances subjected to their action and prepared to receive it. The light of the moon is one of these hermetic spirits…” (Les Demeures Philosophales, 1973). And, what if this ‟substance prepared to receive” was but the Alchemist himself? The text then assumes a whole new signification! It says that light has a strange but real action on the body which receives it, the thesis which Dr LEFEBURE advocates throughout his works: light transforms human beings.

Other Alchemists suggest that the purpose of the Philosopher’s Stone is the transformation of the Alchemist himself. Gold being a metaphor of perfection.
The jigsaw takes shape. The pieces are imbricating into each other. Each author adding to the previous, one can notice that it is really a question of light and inner transformation, the two components of Phosphenism as defined by Dr LEFEBURE.

Had the Alchemists inherited the secrets of the Egyptians, as it is believed by some? Were these secret Phosphenic? It is more than probable… 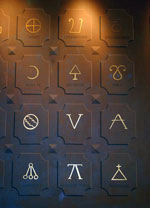