Tesla & Phosphenism, the Egg of Columbus

Regarding the Egg of Columbus mentioned by Dr Lefebure in his book Kundalini Volume I.
The Egg of Columbus is an experiment realized by Nikola Tesla in 1893, during the Chicago World Fair.
There, Tesla presented a device he had designed, for the purpose of demonstrating the principle of the induction motor and the rotating magnetic field.

Tesla’s Egg of Columbus performed the feat of Columbus with a copper egg, placed in a rotating magnetic field. The egg spun on its major axis, standing on end due to the gyroscopic action.
Tesla’s device used a toroidal iron core stator on which four coils were wound.

Reproductions of the device are displayed at the Nikola Tesla Museum in Belgrade (Serbia), in the Technical Museum in Zagreb (Croatia), as well as in the Ann Arbor Hands-On Museum (Michigan USA).

In the video, it can clearly be seen that the egg is submitted to the same action as the whirligig, there is a rotation over a rotation: the egg rotates on itself while rotating in little circles. In the end, its movement describes a whirl or a vortex.

That movement, when it is applied to thought, constitutes the principle of gyroscopic meditation, which purpose is to produce the awakening of Kundalini.
In other ways, for a certain movement and speed of rotation of a visualized image over the blades of the Gyrascope (gyroscopic meditation) Kundalini is awakened and rises!

Recently, I have experimented with the Gyrascope and the Gyropulsar (focusing for 30 seconds on the Gyrascope and then eyes closed for 3 minutes with the Gyropulsar while maintaining a rotational thought on the chakras; I was also listening to the alternated rhythm of 1/6th of a second in the headphones). After a few days, I had surprising vibratory experiences. For several days, I felt my entire body vibrating from head to toe, like a guitar string and, several times, I noticed waves of intense heat rising up from the bottom of my spine towards my belly and my chest. The first time I experienced that vibratory phenomenon in my entire body, I had to stop practicing for several days, such was its intensity…

I am a little bit bluffed as I had started to practice with the Gyrascope for a while but had to stop because I could not maintain a thought rotating in the same direction. But yesterday, I started again practicing with the Gyrascope and added the Gyropulsar and track 3 of the mp3 that is included in the box set. My main visualizations were a golden luminous ball going up from my lower chakra to the top of my head, turning purple as I was going back down while emitting a pulse on the lower, red chakra, at a rhythm of 1/6th of a second with the mantra ‟ki”. Then, when I had enough of that movement of thought, I visualized my spine pulsating at that fast speed. In fact, I followed my inspiration of the moment while trying to maintain it long enough to induce a rhythm in my brain. Sometimes, I was visualizing a pulsating sphere that stopped on each chakra and pulsated on it. Sometimes, it was a spray of sparks going up and rotating clockwise. On the other hand, I cannot maintain the same direction of rotation and prefer an upwards movement of translation. Once I had assimilated the exercise well, I added superficial breathing, and that gave me impressive sensations of heat. That night, I had a first dream, but my consciousness was still asleep until my feet took off the ground. Then, my consciousness started to awaken. I visited the place where I was and then left it. I encountered a dog that had nothing better to do than attack me, going for my throat!! Never mind, I knew that I was in the astral and, consequently, that I was not in danger. So, I did not mind it too much. The dog gave up in the end and, suddenly, I changed rooms and found myself in a corridor with other people. I let them talk to each other and open the window. It was very high!!! I said to myself that, as a principle, I should be able to fly. I consequently decided to throw myself from the window and, there, it was ECSTASY. I plunged into the heart of planets, one of which resembled the Earth. My speed was fantastic and I let myself go, then all these planets became bubbles of water that contracted themselves and I woke up. I remained for long time listening to the acouphene with a luminous ball in front of me. I already had that kind of dream when I practiced sways with the phosphene, though not on the first night. On the other hand, I have the impression that sleeping on the back is important! Tonight, I will add the static tensions.
Daniel is right, when one is anchored in matter too much, the experiences are scarce. Recently, I have performed a 90° turn towards esotericism and spirituality.

A while ago, I built myself a Gyrascope that I upgraded into a bi-gyrascope, and later into a concentric one. That device allowed me to practice the exercises of vertical bi-concentration with a color, of rotations in figure-of-8 and the endless screw described in Kundalini Volume 2. I accompany these exercises with the corresponding mantras at various rhythms. My sessions of Gyrascope last between 45 and 55 minutes. Since, nocturnal experiences have become more and more frequent. I would like to describe one to you. I was having a ‟scary” dream in which a 2-meter ‟monster”, headless and decomposing, was threatening my family. We were stuck in the apartment because a fog that, too, was filled with varied unwholesome ‟things” was surrounding the house. The ‟monster” tried everything it could to enter the house. After a certain number of fruitless attempts, it left a ‟satanic” bible in front of the door hoping that I would be lured into opening the door. No way! It was at that moment that I realized that I was dreaming. I thus took command of the dream, opened the door and asked it who (or what) it was. After a fruitless conversation… I, gently SET IT ON FIRE, in the literal sense of the term. I also took on the opportunity to burn his evil book. I appreciated for a while the beauty of the flames, then I got up and wrote down the story. I actually got up too quickly and had a headache. I had to sleep for a while for it to pass. I find that experience fascinating, only a few months of practice to obtain such entertainment!

Yesterday, I practiced two sessions with the Gyrascope, one during the day and one before going to sleep. This morning, as I lingered in bed for a bit, I realized that my visual chaos was rotating slowly. That really gave me the impression that I was perceiving the movement of rotation of the universe. I am still quite shaken by the experience…

I have built a Gyrascope with color paper for but a few euros.
Two nights after starting practice, I have lived unbelievably intense experiences of consciousness extension. I had the impression I was rotating like a galaxy.
I also use the virtual Gyrascope.

The following device has the possibility to rotate in both directions and its speed can be controlled.
I was really right to follow Dr Lefebure’s guidelines for building it. I practice four sessions of 15 minutes every day and I already benefit from the improvement of sleep, dreams are more vivid and intense… 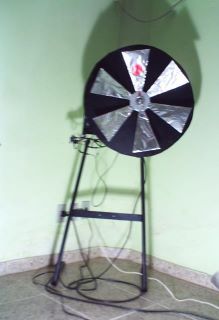 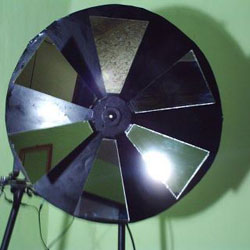 I already own the mechanical Gyrascope that was available in the 80s/90s, as well as theVirtual Gyrascope that has been available since 2010.
However, one day, as I was strolling around a market, I found this windmill composed of 3 paper disks that rotate independently from one another. I believe this is an ideal accessory for practicing with the Virtual Gyrascope (as the latter also uses colored disks). The psyche is very sensitive to colors and I have been able to witness their effect on the quality of my experiences. Thanks to this windmill Gyrascope, and also to my rotating seat (I posted pictures of it in the Gyrophene section) I have enjoyed very memorable experiences.