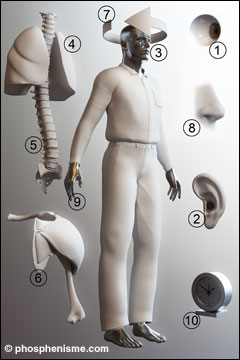 1. Phosphene.
The phosphene corresponds to the sense of sight.

3. Gustatophene.
The gustatophene corresponds to the sense of taste and chewing.
In monasteries, monks eat silently while a brother reads a text.
The host also allows the production of very good gustatophenes, as its taste lingers for a long time.
(Remember the sensation of a taste and observe the evolution of your thoughts – Memories connected to food).

4. Pneumophene.
The pneumophene is related to the act of breathing.

5. Osteophene.
The osteophene is provoked by the vibration of the skeleton.

8. Olfactophene.
This phene corresponds to the sense of smell.
In sacred places of worship, incense is used to stimulate the phene of the sense of smell.
(Recall the sensation of a smell and observe the evolution of your thoughts – memories, images, perception of smells and perfumes.)

10. The subjective perception of time.
Certain experiences induce a loss of the normal perception of time. Often, the experiences seem to last less than their actual duration. For example, a session of an hour and a half can be perceived as lasting three quarters of an hour. Sometimes, an experience seems to take place over a long period of time, when it has only lasted a few seconds of real time. The latter aspect mainly occurs in a state of half-sleep.

All these phenes, and probably others which have not yet been detected (such as the phene of the voice which could be obtained through auditory thinking) are, of course, connected to each other. That is why, if a particular phene is stimulated, sensations connected to another phene can be perceived.

A multi-colored patch, that persists in the field of vision for 3 minutes, in the dark, after having focused on a source of light for 30 seconds.

THE 11 KEY WORDS OF PHOSPHENISM:

Phosphenic Mixing: consists in associating a phosphene to a visual or auditory thought that has been prepared in advance.

Post-phosphene: this is the multicolored patch that persists in the field of vision, in the dark, for three minutes after having focused on a source of light for thirty seconds. Phosphenic Mixingconsists in associating a visual or auditory thought prepared in advance to a phosphene.

Cerebral alternation corresponds to the alternating functioning of the cerebral hemispheres as Dr LEFEBURE demonstrated in his book ‟Exploring the Brain through the Study of the Oscillations of Double Phosphenes”. Phosphenic techniques restore the balance between the hemispheres and thus increase cerebral capacities as a whole.

Point of concentration: this is the visualization that accompanies all the exercises. It is comprised of all the luminous mental images that tend towards the infinitely small: a dot of light, a small sun, the flame of a candle…

Visual chaos (or aura): this is what we perceive in complete darkness or, in certain cases, with the eyes open. It is a variety of phosphene. It is made up of milky patches or sparks that are almost imperceptible. The practice of hunting for details in the visual chaos will allow you to organize it and, with a bit of experience, you will be able to trigger a genuine inner cinema.

Diffuse glow: this is the final phase of the phosphene. It is much paler than the others, slightly grainy and milky grey.

Phosphenic salt: in an acid/base reaction, there is the production of a salt. Dr LEFEBURE uses this metaphor to show that during Phosphenic Mixing, through the process of combining a phosphene and a thought, a new compound is produced. One can observe that upon entering a room where a Phosphenism workshop has been conducted. The energy of the room is very intense and can almost be touched.

Phenic system: this is the whole of the phenes, i.e. the whole of the physiological intermediaries between the physical senses and the equivalent spiritual senses which, once awakened, produce the perception of intangible energies, events or universes which cannot be perceived by the physical senses.
When the phenic system is stimulated, it provokes the perception of the spiritual planes that traditions call ‟beyond”, ‟invisible worlds”, or ‟subtle planes”.
There is an equivalent of the phosphene that corresponds to all the other physical senses, adding as well the sense of balance, muscular activity, breathing, a phene related to the skeleton and the perception of time.

Rhythmic thinking: this consists in repeating the same thought in a rhythmic manner. Rhythm structures thoughts and results in the amplification and accumulation of cerebral energies. That is why all the exercises of Phosphenic Mixing are practiced at a particular rhythm. The Mantratron, the Alternophone, the Synchrophone are devices that allow one to work at a precise rhythm.

Rhythmo-Phosphenism: it is a deep study of Initiatory techniques. The latter, through the increase of cerebral rhythms and intense energies, provokes extensions of consciousness. Through amazing experiences, everyone will discover that they have a possibility of access to an inner universe that used to be reserved to a chosen few. A detailed and in depth study of the phenomena and the initiatory experiences will allow you to discover the foundation of an ancient universal knowledge.

Explanation of the logo of PHOSPHENISM

The Symbol of PHOSPHENISM
The limaçon of Pascal (placed in the center of the cosmic egg in Western esoteric teaching) is the symbol of the analogy between the macrocosm, the mediocosm and the microcosm.Dr Lefebure chose this curve as the symbol of Phosphenism because it is a variety of spirals. It is thus the symbol of the original force in all things and has a whirling structure, whether it is the nebula which gives birth to star systems, the spiral of chromatin at the top of the first mitosis of an egg or the whirling of the blood in the heart which is the center of physical life.

Origin of the term PHOSPHENISM
‟Doctor LEFEBURE created the word PHOSPHENISM® by creating what is called a neologism in grammar, based on the word phosphene, which main root means light, recalling Phœbus, the Sun.”

PHOSPHENOLOGY®:
the study and the teaching of the science of phosphenes.

CHROMO-PHOSPHENOLOGIST©:
a researcher who is specialized in the effects of the colors of phosphenes.

PHOSPHENOMANCY©:
‟Human sciences”: based on the interpretation of signs that appear in phosphenes.

PHOSPHENOTHERAPY©:
a therapy that uses light for well-being.

PHOSPHENOTHERAPIST©:
a physician who uses the beneficial action of light on his/her patients.